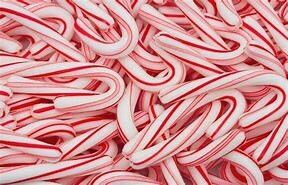 Candy sticks have existed for hundreds of years. Originally these sticks were just plain, straight white sticks made out of unflavored hardened sugar.

One legend says a choir master from the Cologne Cathedral in Germany had candy canes made in 1670, to keep children quiet during Nativity/ Christmas services and had the candies made to look like the shepherd's hooks in the Nativity story. Another story is that the candy canes were shaped like upside down J's, to remind people about Jesus' birth at Christmas time.

The peppermint plant was bred in the 1700s. It is a cross between watermint and spearmint.

The first records of candy canes being used to decorate Christmas trees come from the 1800s. Some people say this is why candy canes are shaped with hooks, so they could be hung on trees.

Around this same time, the peppermint flavour and red stripe were added to the plain white canes. Peppermint was a common candy flavour. Mint, including peppermint, has been used to treat bad breath, sore throat, and indigestion for hundreds of years. Peppermint candies may have become popular at Christmas time because these are all common winter and holiday ailments. No one is quite sure why they were striped with red. Some people say it is a representation of Jesus. It also might be because they became popular Christmas treats, and red had been a "Christmas colour" for hundreds of years.

Candy canes were made primarily by hand until the 1950s, when a machine was patented to mass produce them.