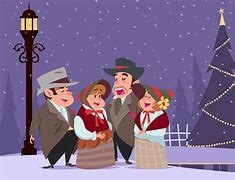 Many ancient cultures sang holiday songs during festivals and holidays. A carol is a song of joy.

Christmas hymns were written between 100-1200 C.E. but where mostly in Latin and not commonly sung. In 1223, songs began to be written for Christmas plays in Italy. Christmas songs, with amusing stories, began to be sung in people’s homes in the 1410s. One example is “I Saw Three Ships,” a song designed to change depending on where it was sung.

The Twelve Days of Christmas has been sung since the 1600s.

Carols went out of fashion from the 1640s to the 1800s. Orchestras and choirs became popular at this time, and they wanted Christmas songs to sing. “Good King Wenceslas” and “Silent Night” are two examples. "What Child is This" was also written in this time period, and set to the tune of a much older English folk song, "Greensleeves," written in the 1500s.

Going around caroling comes from medieval traditions of wassailing; going to visit and drinking to good health (waes hael in Anglo-Saxon).