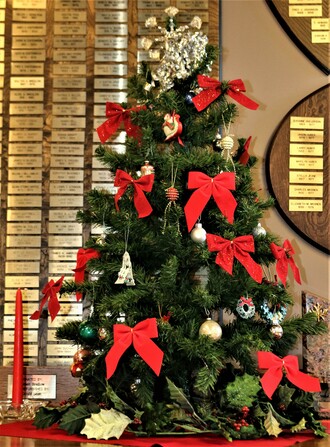 Christmas Tree at the Millet Museum 2020

Many ancient cultures used evergreen trees or wreaths as a sign of eternal life, and as a way to scare away evil.

In the medieval era, people in Germany began hanging apples, wafers, and candles on trees, and placing wooden figurines of characters from the Christmas story on wooden Christmas pyramids. By the late 1500s, the two traditions had merged into one.

Christmas trees became popular in Great Britain in the 1800s, when Queen Victoria married Prince Albert. Albert was German, and brought the tradition with him. Christmas trees began to become popular around the world as people from Germany and Britain immigrated to places like the United States and Canada.

Early Christmas trees where decorated differently from how we decorate now. Before the invention and widespread use of electric lights, candles were used to light trees. Homemade decorations, like paper chains and popcorn strings were common. It was also common to put toys and gifts on the tree. Apples, nuts, candies, and cakes were also put on Christmas trees, and then taken off to eat throughout the holidays.