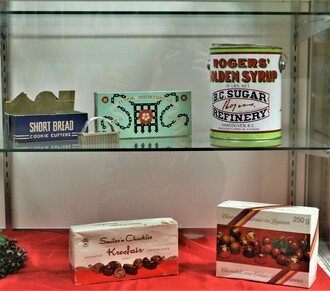 Cookie and chocolate boxes on display as part of the Museum's 2020 Christmas display.

In North America, the tradition of leaving milk and cookies for Santa began in the 1930s. During the Great Depression, many people didn’t have a lot of money. Leaving something for Santa was a way of teaching children kindness and gratitude.

What Children Leave Out Around the World:

Denmark, Belgium, Netherlands: Hay for Santa’s horses, left out in shoes. Little gifts are then placed in the shoes.