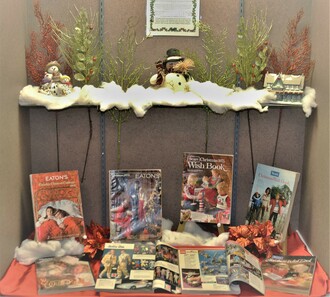 Sears and Eaton's Christmas catalogues on display in the Museum's 2020 Christmas display.

Across the street from Eaton’s, was another department store, Simpsons, started in 1858. Simpsons would eventually partner with the American company, Sears, to become Simpsons-Sears. Simpson-Sears sent out its first catalogue in 1953. Sears had been sending out catalogues in the USA since the 1890s. In 1979, the Hudson's Bay Company bought Simpsons. Sears sent it last catalogue in 1993, putting it online in 1998. They continued to send out small Christmas Wishbooks until going out of business in 2017.

Residents of rural areas, like Millet, often used catalogues to order all sorts of things. They would see something they wanted in the catalogue, then send an order form and money by mail. Their purchase would then be delivered.

There were catalogues all year round. Christmas catalogues/ wish books were used to make Christmas lists and to order Christmas gifts. People also used catalogues to order items like new clothes, including dresses, for Christmas celebrations.

Catalogues became less popular with the rise of access to urban centers, and later, online shopping. Other stores, like Target and Walmart opened in the 1960s, increasing competition. Amazon started in 1994, one year after Sears stopped sending catalogues.