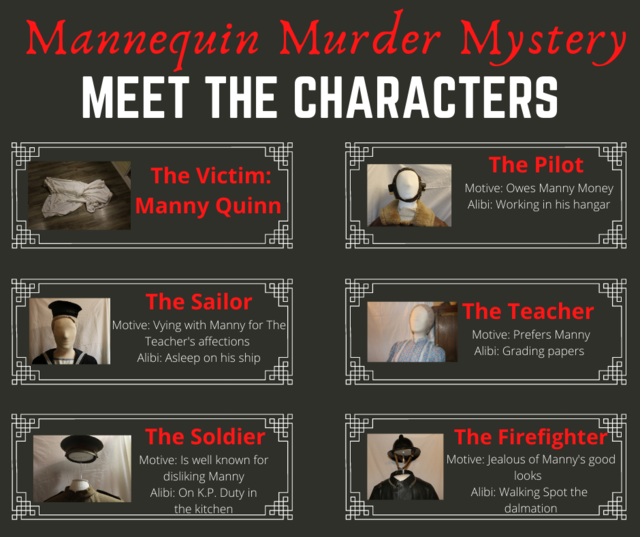 Our resident mannequin-of-all-trades, Manny Quin, was found dead in the Museum's lower level this morning. Manny was last seen alive May 16, 2021, before staff left for the evening. Local investigators suspect one of the other mannequins may have murdered Manny during the night.

Motive: Everybody who knows our fly-guy knows he's always in debt to somebody. Our investigators have learned he owed Manny significant amounts of dough. Could he have killed Manny to avoid settling his debts?

Alibi: Our Pilot claims he was working on his biplane alone in his hangar last night. The plane does show recent repairs, but we have no way of verifying how recently they were made.

Motive: Our Sailor and Manny have been vying for the attentions of our lovely Teacher for some time now. Perhaps our Sailor decided to remove the competition.

Alibi: Our Sailor claims he was asleep on his ship when the murder took place. His comrades can verify he was in his bunk when they woke up, but no one knows if he left during the night.

Motive: Could our Teacher have been less than pleased with Manny's attentions? Or did the two have a lovers' quarrel?

Alibi: Our Teacher claims to have been dutifully grading papers all night. While her desk is full of stacks of papers, our investigators are unable to confirm if they were graded last night, or if the grading would take all night.

Motive: It's pretty well-known around here how the Soldier and Manny felt about each other. The Soldier is known for despising Manny, and showed a suspicious lack of sadness when informed of Manny's death.

Alibi: Our Soldier claims to have been on K.P. duty last night. Various witnesses can confirm this. However, K.P. duty would not take our Soldier all night, leaving him ample time to slip away.

Motive: Manny was one dapper mannequin. Our Firefighter has expressed jealousy over Manny's good looks and charm before. Could he have snapped?

Alibi: Our Firefighter claims to have been out walking Spot the Dalmatian at the time of the crime. Unless Spot likes to walk all night, this alibi does not clear the Firefighter of suspicion.