The Millet Museum created the Millet's Pioneer Women exhibit to celebrate our own local women's contributions. As quoted by the CARMN project - "official" history all to frequently ignored the contribution of women. While the notion of the "hand that rocked the cradle ruling the world" is often citied, with respect to museum collections, the contextual material around the lives of girls and women is not generally collected. Domestic artifacts comprise a huge volume of community museum collections but the women who used them and gave them the patina of age are nowhere described or felt. Where women espouse "male" roles, as politicians and policy makers, they are captured in community histories. But all of those "nameless" and "faceless" women who are brides, mothers, sisters, aunts, teachers, nurses -- all of those ways in which women function in communities -- are frequently missing from the pages of history. The Exhibit begins to give these women their rightful play and makes them visible so that their stories can help us to understand the larger Canadian story. 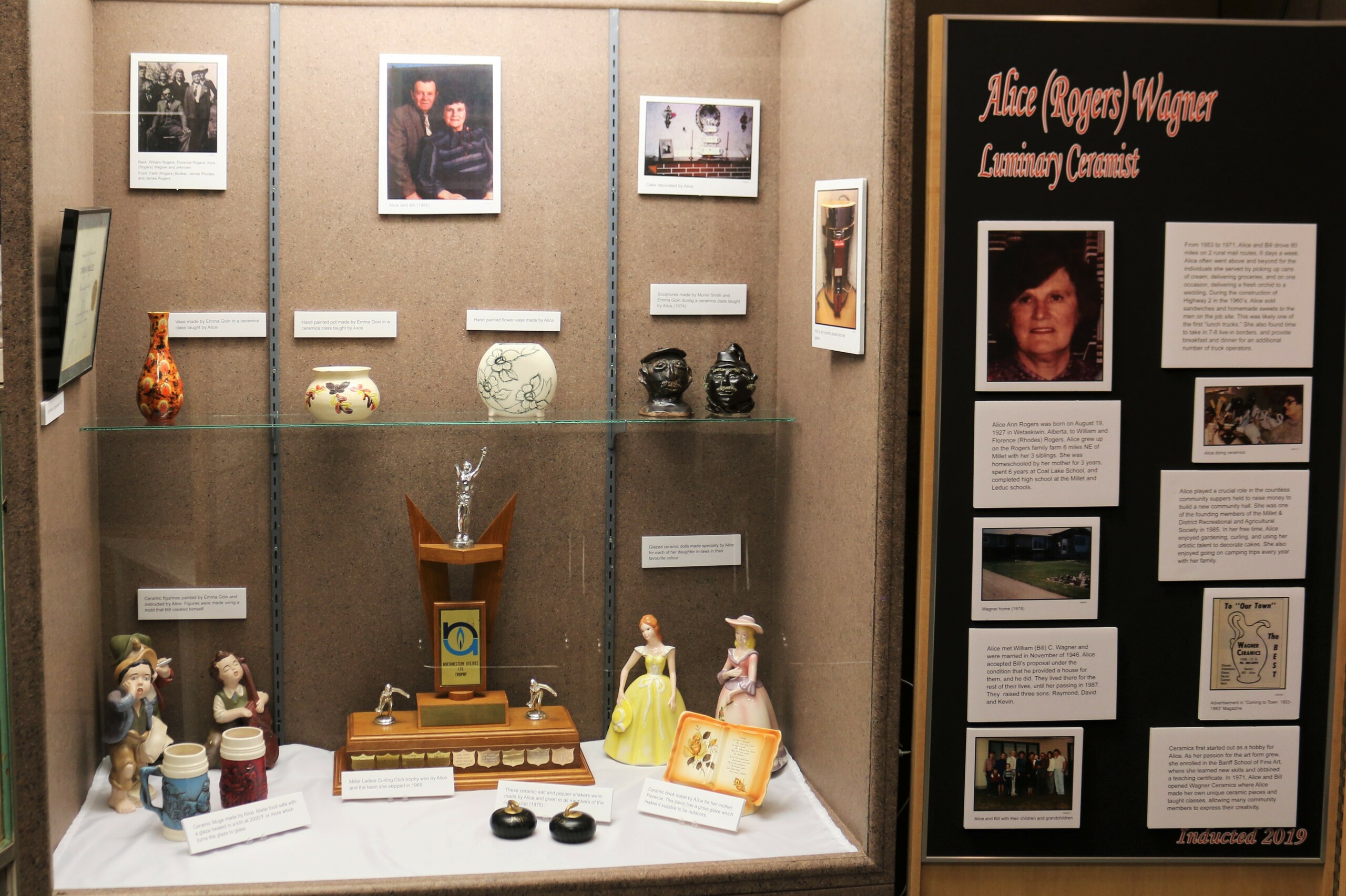 Throughout her life, Alice contributed greatly to the success of Millet with all of the time and energy she put into everything she did. She held the idea that everyone has an obligation to serve their community in any way that they can and modelled her life around this belief.
Alice Ann was born on August 19, 1927 to parents William and Florence Rogers. The oldest of four children she had two brothers, James and William and one sister, Faith. She was raised on the Rogers family farm, which was located 6 miles northeast of Millet.
In 1943, Alice met the love of her life William (Bill) Wagner. At the time, he was the mailman for the route the Rogers family farm was on. When Bill proposed, Alice accepted on the condition that Bill provided a house for them to live in. He did and they were married on November 19, 1946. Alice and Bill had three sons Raymond, David, and Kevin.
Alice was known throughout the community as the post courier for both rural routes in Millet. From 1953 to 1971, she drove 80 miles a day, 6 days a week to deliver mail. Alice’s son Ray remembers the time that Alice rolled her jeep and still had the presence of mind to throw an expensive orchid corsage out the window to save it. It survived the situation and was delivered to the next farm for a wedding. She often went above and beyond by taking on little tasks that made a big difference in the lives of the community members she served. Florence Day recalls that her mother Ethel Lantz used send her cream with Alice to be taken to the creamery as she had no vehicle herself. This small act of kindness meant a great deal as it contributed significantly to Ethel’s income.
In 1971, Alice and her husband opened Wagner ceramics. This is where she taught ceramics classes that have allowed many community members to create beautiful pieces of art. When she wasn’t teaching, she was always creating new and unique pieces using many different techniques that she had learned over the years.
Alice was a founding member of the Millet and District Recreational and Agricultural Society in 1985. During her time in this role, Alice assisted in fundraisers that allowed the curling rink and the Agriplex to be built. She was also known for being a part of all of the community suppers that were put on to raise money to build a new community hall. She worked hard volunteering in many other organizations and still found time to decorate cakes for her children’s weddings, go camping with her family and garden until her passing in 1987.
With her ceramics, Alice has inspired many members of the community to embrace their creativity. The volunteer work she has done over the years has helped make Millet a better place to live. Alice was very generous in her both her time and energy and her willingness to serve her community is what makes her an exceptional pioneer woman. 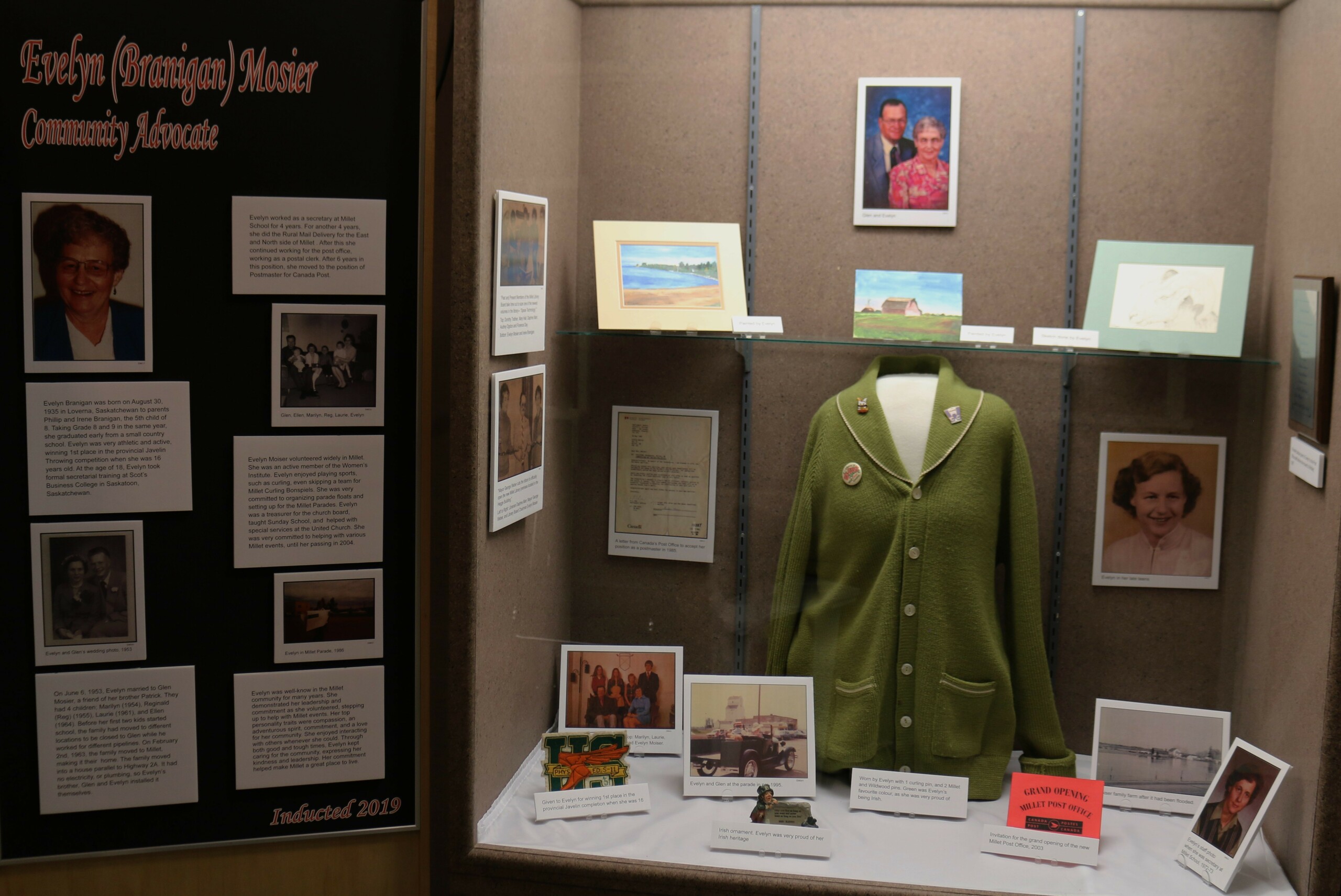 Evelyn was a public-face for many years in Millet. Evelyn was committed to everything she did and enjoyed interacting with people. She gave up her time to make Millet a great place to live.
Evelyn was born on August 30, 1935 in Loverna, Saskatchewan. She was the 5th child of 8 children born to Phillip and Irene Branigan. She excelled in school, graduating early because she took grade 8 and 9 in the same year. In 1953, Evelyn went to Scot’s Business College in Saskatoon, Saskatchewan to take formal secretarial training.
On June 6, 1953, Evelyn married Glen Mosier. They had 4 children; Marilyn (1954), Reginald (Reg) (1955), Laurie (1961), and Ellen (1964). The family moved to Edmonton in 1962, then to Millet on February 2, 1963.
Evelyn worked as the secretary for Millet School for 4 years. She ran the rural mail route for 4 years, and then worked at the post office as a postal clerk for 6 years. In 1985, Evelyn became a postmaster at the Millet Canada Post Office. Evelyn worked as a postmaster in Millet for 2 years. After that, she was transferred to Winfield, AB, to continue working as a postmaster. She worked in Winfield, AB for 10 years.
Evelyn was very active in the community. She was a treasurer for the church board, taught Sunday School, and helped with special services at United Church. Evelyn was an active member of Women’s Institute. She was actively involved in Millet Recreation board and the curling club. Evelyn and Glen were very involved with community events, such as parades and costume parties. Evelyn organized town events including parade floats.
Evelyn went to the University of Alberta to take several night classes including Canadian History. She was also keenly interested in political issues and discussions. In her free time, Evelyn enjoyed painting and drawing old aged barns and grain elevators. On the farm, Evelyn was very involved and looked after the farm animals.
Evelyn was the type of person who loved to interact with other people and get to know their personalities. She demonstrated compassion,  commitment, and love to her friends and the members of Millet. She went to most events, showing her leadership and commitment. 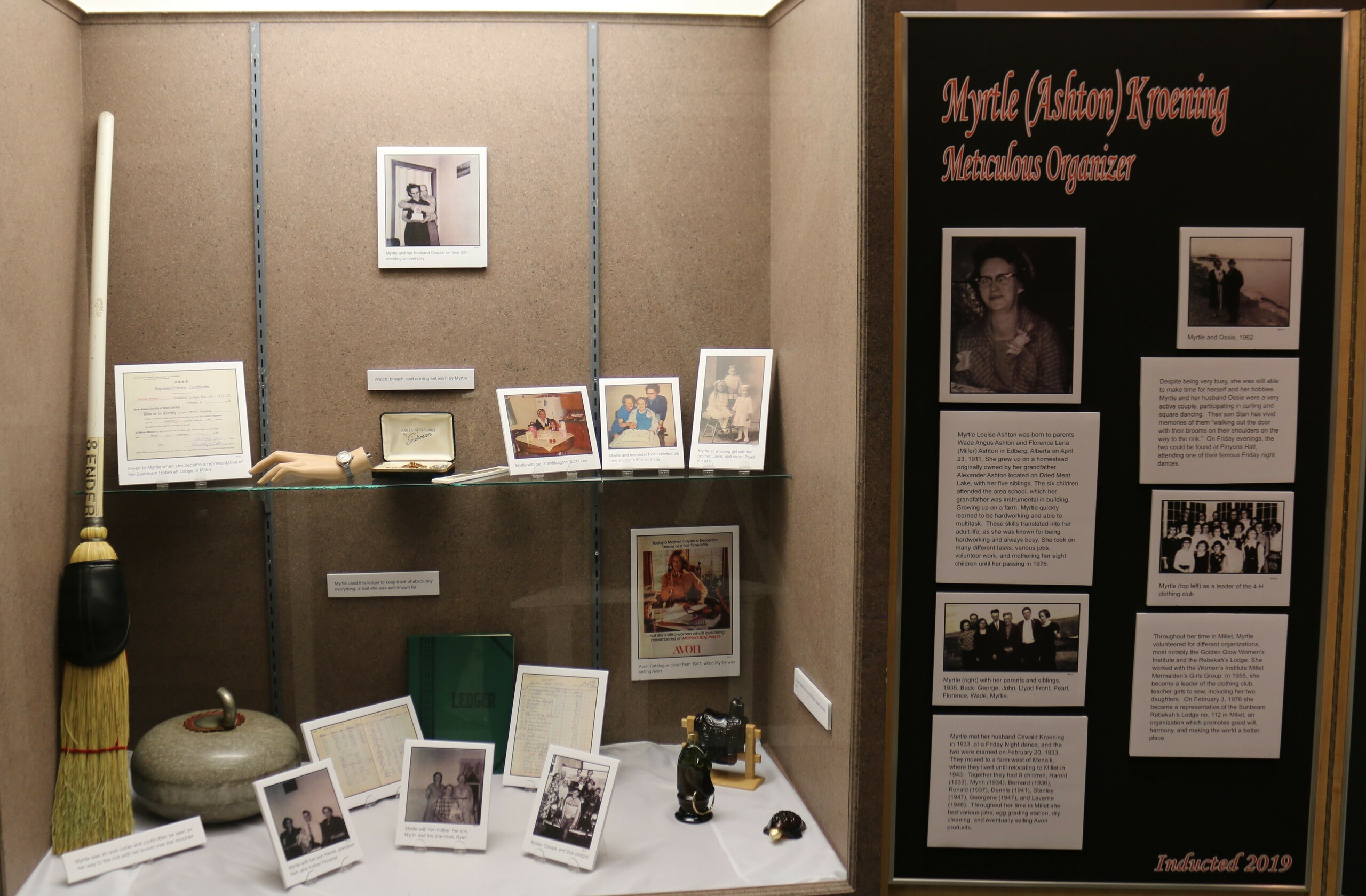 During her years of living in Millet, Myrtle was very dedicated to her community as seen with her volunteering and the activities she did in her spare time. Myrtle volunteered a lot of her time to the Golden Glow Women’s Institute, and the Rebekah Lodge. In her spare time she could be found square dancing, curling, or playing Yahtzee with her family.
Myrtle Louise was born on April 23, 1911 to parents Florence and Angus Ashton. She had 5 siblings, 4 brothers George, John, Raymond, and Lloyd, and one sister Pearl. The family lived on a homestead on Dried Meat Lake that was originally owned by her grandfather Alexander Cameron Ashton. The family lived and worked on the farm, which helped Myrtle to gain some of the traits that would be so important in her adult life; her hardworking nature and ability to multitask.
On February 20, 1933, Myrtle married Oswald (Ossie) Kroening. It is unknown exactly how the couple met; however, the most common story is that they met at one of Pinyons Hall’s famous Friday night dances. They continued to go there because of their love of square dancing and eventually took their daughter Georgene to learn how to dance. Myrtle and Oswald had 8 children; Harold, Myrin, Bernard, Dennis, Ronald, Stanley, Georgene, and Laverne. The family originally lived on a farm west of Menaik until they moved to Millet in 1946.
In Millet, Myrtle did a lot of work for the Golden Glow Women’s Institute. In 1949, the Millet Mermaids 4-H clothing club was first established under the leadership of Bessie Rupert, however, Myrtle ended up taking over the leadership of this club in 1955. Her work with the girls club included teaching young girls how to sew. Even after she stopped volunteering at the girls club, she never stopped wanting to teach others. Her granddaughter Kelly Lee has a fond memory of her grandmother teaching her how to sew an apron.
One thing Myrtle was known for was her organizational skills and how she kept track of absolutely everything. She had a couple books for this purpose. One was a scribbler that had every birthday, wedding, and funeral written down, and the other was a ledger which she used to keep track of all financials and her volunteer work. This is how her essence of ‘meticulous organizer’ was chosen by her children.
Although the clothing club was the volunteer work she was most involved in, Myrtle was also known for other things in the community. She worked with the Sunbeam Rebekah Lodge and became a representative of a lodge in Millet in 1976. She was also the neighbourhood ‘Avon lady’ and sold Avon products from 1971 until her passing in 1976. Even though her spare time was limited with her volunteer work, various jobs, and 8 children, Myrtle was still able to participate in her hobbies. Myrtle was an avid curler and spent a lot of time at the local curling rink, which at that time was located where the museum is now. Her son Stan has vivid memories of her and Oswald leaving the house with brooms over their shoulders on their way to the rink.
Myrtle Kroening was an inspiration to those around her and we hope this exhibit truly exemplifies the accomplishments made throughout her life.