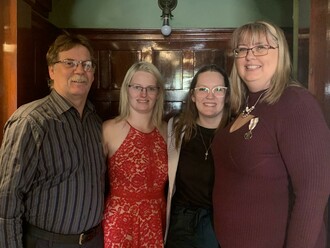 Congratulations to Tracey Leavitt, Executive Director/Curator (ED) of the Millet & District Museum & Archives, on her receival of the Queen’s Platinum Jubilee medal for significant contributions to the province in the area of heritage. The heritage medals were planned to be presented on September 17, at the Alberta Museums Association (AMA) end of conference awards ceremony, however, the official mourning period for the Queen delayed the presentation. The medals were awarded on November 15, by AMA President Sarah Newstead and ED Jennifer Forsyth, in a ceremony at Lougheed House, Calgary.

In honour of the seventieth year of the late Queen Elizabeth II’s reign, 7,000 medals will be awarded to Albertans this year, to recognize and honour individuals who have made significant contributions to their communities. Out of these 7,000 medals, only ten were awarded for heritage. Tracey was nominated by the AMA for her thirty years of service with the Millet & District Museum, and with the broader Albertan heritage sector.

Tracey began working at the Millet Museum in 1992 and became ED in 1996. Since then, she has devoted many hours -both paid and volunteer- to the local community and province. Over her thirty years, Tracey has led the Museum in partnerships with the Millet Legion, Lions Club, Ag Society, Millet in Bloom, Millet Seniors, the Millet Tourism Committee, the Leduc-Nisku-Wetaskiwin Regional Chamber of Commerce, the Pigeon Lake Chamber of Commerce, and many more, helping with their events, advertising, and preserving their history. Amongst many other exhibits, Tracey began the Pioneer Women exhibit in 2011, as part of the broader Central Alberta Regional Museums Network (CARMN) project, Women of Aspenland. This annual exhibit has now highlighted the contributions of over fifty of Millet’s community members. Tracey has held positions on the CARMN board for over ten years, serving as Co-President, Vice-President, Past President, and Secretary.

Tracey is known throughout the province as an advocate for small rural museums and emerging museum professionals. She has mentored many museum professionals and volunteers from museums, archives, and visitor information centres, providing advice and a listening ear. She has also served on multiple advisory committees, such as the advisory committee for the design of the new Royal Alberta Museum, grant adjudication panels, and committees of the AMA, Archives Society of Alberta, and Alberta Visitor Information Providers.

Tracey has trained and mentored over ninety summer staff and seven interns, many of whom are still active in heritage and volunteerism. These positions are deeply valuable to post-secondary students looking to pay for their schooling and to develop marketable job skills. Her positivity and intentional mentorship help to make the museum the positive work experience that it is. One of Tracey’s most amazing qualities is her ability to form connections and relationships. Between her professional involvement, and extensive personal volunteerism over the years, Tracey has deeply established herself as a facet of Millet.